Why is a strong dollar good for Mexico to export via IMMEX?

The exchange rate has evolved in Mexico, which can be seen as an opportunity for export and imports companies, as well as international logistics and distribution benefited by the IMMEX program, and make use of bonded warehouse facilities.

Mexican customs and tax regulation promotes manufacturing, maquila and export services in the IMMEX Decree. That way, companies incorporated in Mexico can import supplies for the manufacturing industry and store it in bonded warehouses.

After cross docking, they pay taxes and fees at the minute they can release goods for their distribution to their customers.

Companies that work under this tax and trade franchise had a very positive year in 2016.

According to figures from the Mexican Institute of Statistics and Geography (INEGI)  by  El Financiero,  IMMEX facilities in the state of Querétaro reported income of over 90.5 billion Mexican pesos (US$ 4.1  billion), in the first ten months of 2016, with a 16.3 increase from 2015. Guanajuato, for instance, reported income for 234.7 billion Mexican pesos (US$10.6 billion), rising 16.1%. 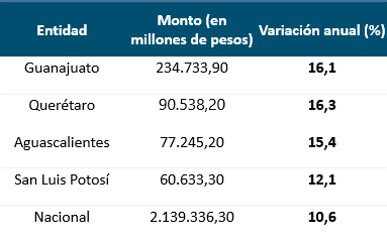 The analysts consulted by El Financiero mentioned that the growth is related, among other factors, with the strengthening of the US dollar against the Mexican peso, in steady, historical rises from the beginning of 2016.

In November 2016, the same newspaper said that the income from foreign markets reported significant levels of dynamism in the manufacturing and -especially- the non-manufacturing industry. That led to a rise both in companies using the IMMEX franchise and the number of personnel working in the sector. El Financiero calls this, “the biggest expansion of staffing in this program in over a year.”

Why is a strong dollar good for export companies in Mexico?

A couple of years ago, Forbes contributor  Bob McTeer wondered about the pros and cons of the dollar exchange rate. He admitted, this all “”.

“From the broad macro perspective, a stronger dollar benefits the domestic population by improving their terms of trade with the outside world.”

Adam Hayes told Investopedia that “because local prices in foreign countries are not influenced greatly by changes in the U.S. economy, a strong dollar can buy more stuff when converted to the local currency.”

“Foreign companies that do a lot of business in the U.S. and those companies’ investors will benefit. Multinational corporations who have a large number of sales in the U.S., and therefore earn income in dollars, will see gains in the dollar translate to gains on their balance sheets. Investors of these companies should be rewarded as well.”

This provides a range of benefits tor the export industry, especially companies who use IMMEX and their supply chain in Mexico.

On one hand, they trade their products abroad in US dollars. But locally, they work with Mexican currency, including paying their taxes.

If they put forward fees for shipments, these will be increasingly lower if the dollar rises and the Mexican peso devaluates.

These are critical savings for the supply chain of manufacturing industries, who use customs bonded warehousing facilities, putting forward taxes and fees until those goods are shipped to their local destination.

With a high dollar, export-based industries who trade in dollars get a higher return when they work in Mexican pesos with the local logistics industry. Their liquidity increases and they can boost their productivity.

Do you have doubts about the IMMEX program, bonded warehousing, export and currency? Send us a comment.